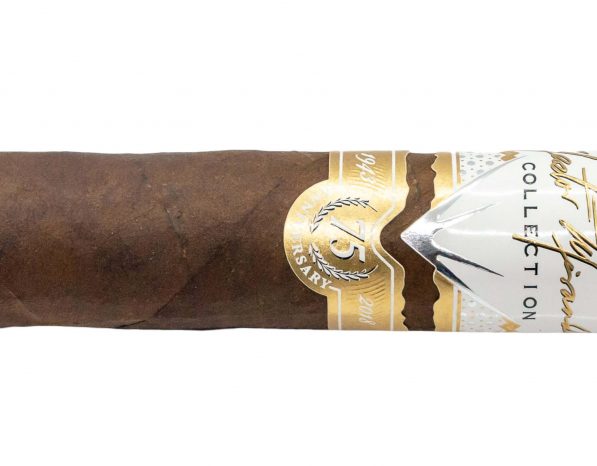 Miami Cigar & Co. announced the Nestor Miranda Collection, 75th Anniversary back in April of least year. The cigar comes in one vitola, a 7 1/4 x 57 salomon. It is a Nicaraguan puro and sells for $19 a stick. The name celebrates the fact that Nestor Miranda is 75 years old.

Only 1,000 boxes of 15 were made. The cigar is rolled, like the other Nestor Miranda cigars, at the My Father Cigars S.A. in Estelí, Nicaragua. The cigar was officially released at the 2018 IPCPR Convention & Trade Show in July, but TAA members were able to pre-order at their annual meeting in May. It shipped September 2018.

The Nestor Miranda 75th is a gorgeous salamon size cigar with a nice dark brown corojo wrapper.   The band on this cigar is elegant and the color scheme is striking against the wrapper.   The wrapper has a nice sweet aroma from the wrapper and a bit of cedar on the foot.

The cigar takes to flame quickly.   The first few draws are a bit tight but it quickly opens up.   Off the bat I am getting tons of flavor out of this cigar.  Lots of sweetness, coffee, and a really bright citrus finish with a blast of pepper through the nose.   The finish is very long and that citrus is really nice.

The second third begins with slight changes as the sweetness is fading with the coffee staying strong.   As the second third comes to a close an earthiness comes to light.   The bright citrus notes have faded which is disappointing as I felt it was a very unique taste.

The final third does not see too much transition from the flavor I was getting throughout the second third.   Sweet, creamy coffee notes take us all the way to end.     I do get an odd mineral note at the end that wasn’t off putting but it  did bring the cigar down a notch.

I always look forward to the anniversary cigars from Miami Cigar.   From the 25th anniversary of the company to celebrating Nestors 70th anniversary to the 75th I just smoked.    The packaging on these are always stellar and cool to keep around.  The humidor from the 25th is still one of my favorite pieces and tho only desktop humidor I still utilize.   I often find myself attracted to buying Salomon size cigars and never find time to smoke them.    I was excited to finally sit down and spend 2 hours and 40 minutes with this cigar.   It was well constructed and only required a few burn corrections throughout and the draw after the first few puffs opened up and had just right amount of resistance.   The flavors profile while fairly consistent in each third would constantly alternate between flavors.   One moment I would get the sweetness strong and in your face and it would then switch to coffee etc. Making it a very interesting smoke.   Highly recommend this cigar and hope to pick up more.