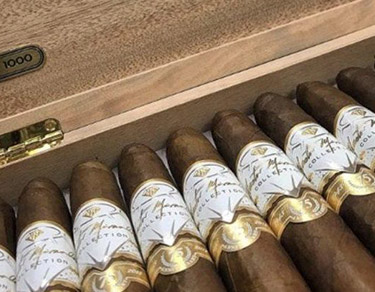 The first new, non-flavored cigar from Miami Cigar & Co. in two years is scheduled to ship in August.

That cigar is the Nestor Miranda Collection 75th Anniversary, which pays tribute, not to the brand’s 75th anniversary—its is only 22-years-old—but rather, the company’s founder, who turned 75 this past Valentine’s Day.

It’s a 7 1/4 x 57 salomon made entirely of Nicaraguan tobaccos. Like the rest of the Nestor Miranda Collection, it is being made at My Father Cigars S.A. in Estelí, Nicaragua.

Production is limited to 1,000 boxes of 15 cigars. Orders started in early May, with members of the Tobacconists’ Association of America (TAA) able to place preorders at the organizations annual meeting and convention. Other retailers will have the opportunity to place orders at next month’s IPCPR Convention & Trade Show, which begins July 13 in Las Vegas.

The Nestor Miranda Collection 75th Anniversary is expected to ship in August.

Link to original article below