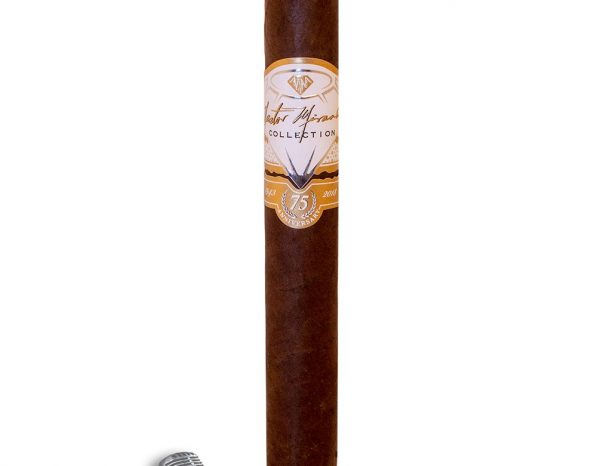 Nestor Miranda the patriarch of Miami Cigar & Company celebrated his 75th birthday in February of 2018 and at that time it was announced that the company would be coming out with a cigar to celebrate the milestone. As with past Nestor Miranda cigars the company has turned to My Father Cigars in Esteli, Nicaragua to produce this cigar that is limited to just 1,000 boxes of 15 cigars.

In true Latin America fashion the cigars have been released almost eight months after his birthday which makes it right on time.

The Look: Packaged in a gorgeous white lacquer box with gold accents the numbered boxes feature fifteen gorgeous looking salomons. The Corojo wrapper is dark and oily with some thin veins. The band on this cigar pays homage the diamond anniversary and its classically done. In the hand its firm with a nice weight.

As we smoke the first third of the excellent burning Salomon there are notes of pepper, cocoa, nuts and a subtle apricot. There is also some saltiness and abundance of red pepper on the nose.

Second third seeks the addition of some cinnamon notes, with continued red pepper on the retrohale. The notes on this cigar are crazy complex with touch of vanilla, cinnamon, cedar, salt, oak, and a slightly earthy finish

The last third of the cigar offers up notes nuts, cedar, anise and a earthy finish. The cigar continues to offer some saltiness, with red pepper on the retrohale.

The Finish: Miami Cigar & Company isn’t known for salmons nor is the factory they’ve worked with for all things Nestor Miranda, My Father Cigars. So it was a curious choice to make these in order to celebrate the 75th birthday of Miami Cigar, especially considering the size can be a tough sell for retailers. However, it is a memorable cigar just like the man, the myth, the legend, Nestor Miranda himself. I’ve smoked three of these since we got them in, and it’s been worth every penny.

To view the original article on TheCigarAuthority.com, Click Here