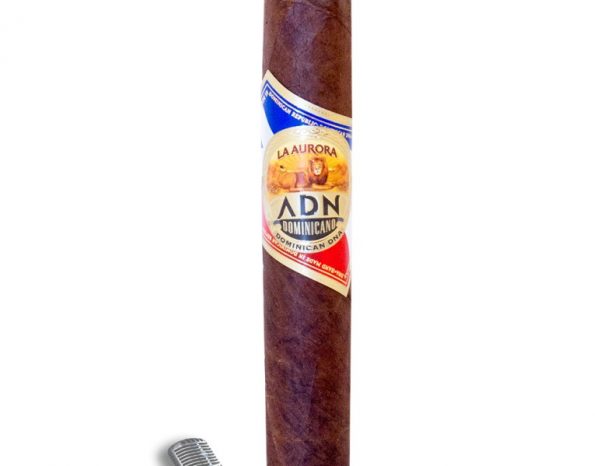 La Aurora DNA Dominicano is a cigar that features Andullo tobacco. Using this type of tobacco, La Aurora pays tribute to the oldest Dominican tobacco process and although little known today is deeply ingrained as an essential part of the Dominican Republic’s tobacco culture and its processing practices for hundreds of years.

La Aurora, with this new release has rescued the use of Andullo as an essential and unique component in the cigar filler by using it as a whole leaf in the filler.
Andullo is a hard-to-work tobacco that is unique in cigar making; its strength, inspiring aroma and sweetness, combined with a well-balanced blend provides a completely exceptional smoking experience.

The Look: The La Aurora DNA comes in a bright and colorful box utilize the colors of the Dominican Republic Flag. The cigars feature an oily wrapper with a few thin veins and the leaf from the Cibao Valley is mahogany in color. The band is awesome, as the die cut it different then the standard. It features a waving Dominican flag in the background with the La Aurora logo in the front and the words ADN Dominicana. In the hand the cigar is firm with a nicely packed foot.

The Notes: The cold draw of the La Aurora DNA has an amazing sweetness to it and much like the cigar we reviewed yesterday its loaded with plum and apricot notes. The aroma off the foot mimics the cold draw although it isn’t as potent. Once we toast and light the cigar from the first cigar factory of the Dominican Republic the initial notes are of that of a dark roasted coffee bean.

Once the cigar is toasted and lit, the first note has a citrus like quality to it, that borders on tangerine. As the first third continues there are notes of cloves, bakers chocolate (bitter) and milk chocolate (sweet). The finish of the cigar is somewhat long with a touch of hay and nuttiness.

Moving into the second third of the La Aurora Dominican DNA some hints of cinnamon begin to develop while the citrus remains as an afterthought. There is some subtle red pepper in the mix with a but of hay and leather. On the retrohale the cinnamon notes really shine with some floral qualities as well.

The last third of the La Aurora DNA sees as espresso note develop that is reminiscent of the creamy foam that sits on top of the black coffee. The finish of the cigar has a roasted nuttiness that lingers fairly long. It’s safe to say the finish in the last third continues to grow in terms of duration that sees some chocolate on the backend.

The Finish: I’ve seen people refer to this as a medium strength cigar, but it is full. While it may start medium, the strength creeps up on you and by the time the cigar finishes you feel like you went the distance. It’s also full flavor with a lot of complexity to it with a bunch of subtle nuances that each time I smoked it, which is about 6 so far I picked up something new. I think its safe to say La Aurora is once again a major player in the premium cigar world with back to back releases that are worthy of a spot in the humidor. On a side note, if you want to learn more about the Andullo process there is a video at 2GuysCigars.com.

This article originally appeared on thecigarauthority.com