The Cigar Authority LIVE with MCC’s own Jason Wood 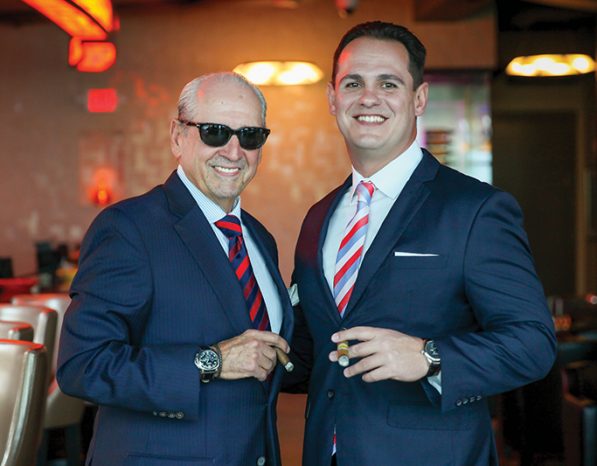 Miami Cigar & Co. is the story of a family’s vision of a better life filled with opportunity and success—and serves as a lesson on how you can get the most out of your own life.

The cigar industry is full of success stories, but few are as unique as that of the Miranda family and Miami Cigar & Co. Cigar enthusiasts know

the company for its products, which include Tatiana and the Nestor Miranda Collection, as well as other premium cigar products that it

distributes, such as those produced by La Aurora and and Viva Republica. The true story of Miami Cigar & Co. is about hard work and the value

of never putting a limit on how big one can dream.

Over 15 years, Nestor and Mariana lived in 12 different cities as Nestor continued to sell different liquors for Southern Wine & Spirits. After

settling in Miami with their two children, Danny and Tatiana, his wife Mariana got an idea for a new business opportunity.

Searching for a way to capitalize on Nestor’s many relationships with liquor retailers, Mariana realized that many of the stores Nestor visited

also sold cigars. The couple knew someone who made cigars, and when he offered to make some just for them they decided to take him up on

his offer. Mariana had some free time during the week and started selling cigars to these liquor retailers. Nestor helped her sell cigars on the

“Mariana was selling cigars out of the trunk of her car, so she was actually the founder of Miami Cigar & Co.,” explains Jason Wood, vice

president of sales and marketing for the company. “Mariana and Nestor started at a good time—right before the cigar boom. On Saturdays

they would drive down to the [Florida] Keys and would keep driving south until they sold $1,000 worth of product. Once they did, they would

stop in a hotel, have a nice zdinner and do it again. Months would pass by, and they would say, ‘OK, now we’re going to sell $2,500 worth of

product.’ Once they would sell $2,500, then their target would go up again.” By 1989 the Mirandas had decided to incorporate their cigar

One Life to Live

As Miami Cigar & Co. continued to grow, it embraced the mantra “One Life.” Not only did the simple phrase drive the company’s marketing

campaigns, but it perfectly summed up Nestor and Mariana’s approach to life in general.

“There are many people who were in a similar situation [as] them and came from an outside country to the U.S.,” Wood explains. “You can

decide to do whatever you want with your one life. You can decide to be a bum, you can be a thief, you can be somebody who works their

regular 9-to-5 and makes their minimum wage and they’re happy with that, or you can really hustle and grow. Nestor and Mariana weren’t

complacent—they hustled, and everything they have now they earned.”

For Nestor, his past often drove him to work even harder to achieve more success. After he became a district manager for another liquor

distributor and importer, he won a trip to Los Angeles and decided to use it as an opportunity to revisit part of his past. He told his wife that

during their trip to Los Angeles he wanted to stay at the Beverly Hills Hotel, where he had worked as a busboy years earlier. It had been his

dream to one day return to the hotel he had once worked at and to stay as a guest when he could afford to do so.

During the check-in process, Nestor found himself staring at a young busboy working at the hotel’s restaurant. When the desk attendant asked

him if everything was all right, Nestor told her that the busboy used to be him. Since the attendant didn’t seem to understand what he meant,

Nestor went on to explain that years ago he worked as a busboy at the hotel soon after arriving in the U.S.

Impressed and moved by his story, she relayed it to the hotel’s general manager, who not only upgraded the Mirandas’ reservations but sent

them a bottle of champagne and invited them to breakfast the next morning along with some of the hotel’s corporate staff. According to

Wood, this was a highlight of Nestor’s life and showed that hard work and determination could help an entrepreneur like him fulfill his dreams.

Extending the Vision and Tradition

Along with pushing its family-branded cigars Tatiana and the Nestor Miranda Collection into more retail locations, the company has become a

successful distributor of several other cigar brands. For 24 years, Miami Cigar & Co. has distributed La Aurora because Nestor befriended its

founder, Fernando León. Today, La Aurora is run by Fernando’s son Guillermo and has more than 1,000 SKUs that meet the U.S. Food and For the company’s own brands, Tatiana remains its best-selling product. Within this one brand, there are 150 different SKUs covering different

sizes and various flavor profiles, giving retailers a product that will appeal to a wide range of customers.

“It’s a product that we place in stores confidently, knowing that it’s going to sell,” says Wood. “If it’s a new account or an account that hasn’t

bought in a long time, we know that we can place Tatiana in that store location and we’re going to get an instant winner. Even if they don’t

have the flavor-infused customer currently, it will create a niche in their store.”

The company remains true to the vision Nestor and Mariana had years ago, when they first traveled to the U.S. from Cuba—freedom,

opportunity, perseverance and the result of years of hard work and sacrifice. It’s a success story and lesson every entrepreneur can learn from:

You only have one life to live—make it count for something.