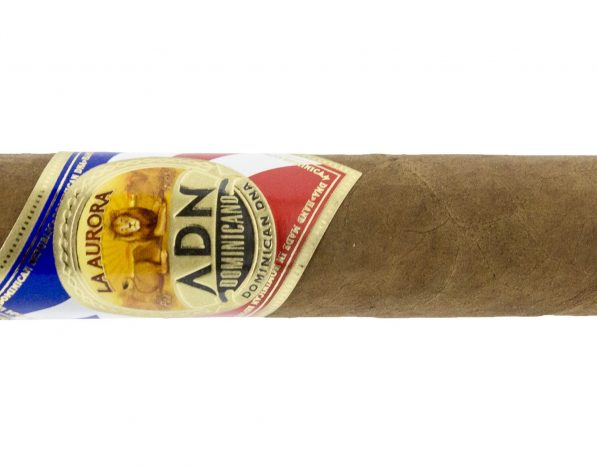 La Aurora announced the ADN Dominicano in February of 2017. This is the first blend from La Aurora to use the Andullo tobacco. Using this type of tobacco, La Aurora pays tribute to the oldest Dominican tobacco process and although little known today is deeply ingrained as an essential part of the Dominican Republic’s tobacco culture and its processing practices for hundreds of years. Today we are reviewing the La Aurora | ADN Dominicano Robusto.

Andullo is used in this blend as a whole leaf in the filler. Andullo is a hard-to-work tobacco that is unique in cigar making; its strength, inspiring aroma and sweetness, combined with a well-balanced blend provides a completely exceptional smoking experience. It is available in 4 vitoals:  Churchill (7 X 47 ), Gran Toro (6×58), Robusto (5 X 50), Toro (5 3/4 X 54).

“A big ring gauge cigar (maybe 56?) with prominent veins, it looks like the roller might have been a little off their game when this stick was built. The foot is slightly larger than the head, and the cap has a pretty noticeable wrinkle in it. ” –Dave W. (mdwest)

“Aromas were not strong on this cigar but rich tobacco notes with hints of dried fruits were noticeable. ” –Isaac M. (The Nothing)

“This cigar started off with a delectable blend of savory and sweet, that was quite rich. Graham crackers and dried fruits played around a base of rich tobacco. Oak was the decided player on the retro. ” –Isaac M. (The Nothing)

“The flavor profile presented is nice. I just wish there was more of it. Flavors are noticeably light, but are a well balanced blend of wood and nut notes. ” –Dave W.(mdwest)

“Things toned down in the second third. Rich tobacco remained the on the forefront and was joined by the oak previously on the retrohale. With the cigar rolling along at a mellow pace, it was easy to see some of the other ways this cigar excelled.” –Isaac M. (The Nothing)

“The sweet and savory battle returns in the last third. While the rich tobacco continues to dominate the main flavors, it was joined with figs and rosemary, seemingly coming and going, fighting throughout the last third. ” –Isaac M. (The Nothing)

“The final third ends pleasantly. There is a sweetness to almost every puff with a rich cedar note and mild white pepper finish. The smoke output is excellent now producing thick white clouds of chewy smoke. Kind of a perfect end to mild relaxing cigar. ” –Alan (Eulogy)

“While the draw was loose, it was consistent, and combustion was consistent as well, providing an even burn from beginning to end. ” –Dave W. (mdwest)

“A thick vein in the binder had affected this cigar only visually, but it was enough that I probably would have passed this cigar for another in the box. Otherwise this cigar seemed to be extremely well made. ” –Isaac M. (The Nothing)

“Overall this was not a very enjoyable smoke. Maybe the raw flavors will mellow with a bit of age, but I think that this cigar is an example of a disturbing trend toward marketing big ring smokes without giving much thought to developing a blend that works in a large ring format.
I’m giving up on this at the 85 minute mark, but there’s probably another 20 minutes at least of smoking time here. ” –John I. (John I.)

“This cigar smokes nice and cool and will burn for a long time. Don’t plan on it for a quick lounge visit, but rather for a time when you can sit back, relax and enjoy for a good amount of time. ” –Isaac M. (The Nothing)

“This is a great cigar. It’s certainly mild throughout, but the flavors were on point and is a great cigar for start the day. It reminds me why I enjoy smoking cigars; the relaxing nature, ease of smoking, and enjoyment of taking time out of the day to relax. I would certainly recommend this to someone who enjoys milder smoking experiences. ” –Alan (Eulogy)

“Unfortunately this one was only “fair” to me. If the draw had been a little tighter its possible the flavors would have come out a little more clearly and I would have given the cigar a better overall rating. The profile is something similar to what I normally enjoy. There just wasnt enough flavor present to excite or wow me in any way. I might consider giving it a try again in a smaller RG.” –Dave W. (mdwest)

SUMMARY “This is a great cigar. It’s certainly mild throughout, but the flavors were on point and is a great cigar for start the day. It reminds me why I enjoy smoking cigars; the relaxing nature, ease of smoking, and enjoyment of taking time out of the day to relax. I would certainly recommend this to someone who enjoys milder smoking experiences. ” -Alan (Eulogy)