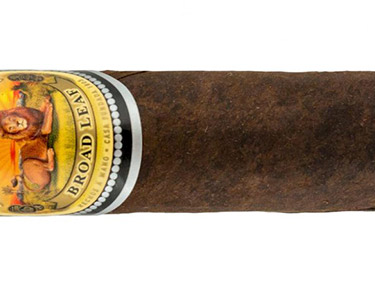 At IPCPR 2016, La Aurora launched three new vitolas sans tube in each of the 7 blends of the “La Aurora 1903 Edition” line. The company started with the introduction of these formats in the Diamond, Sapphire and Emerald blends. Today we are reviewing the La Aurora | PreferidosDiamondBroadleafToro.

“Manure on the body with manure mixed with chocolate on the foot. ” –Mickey T. (irratebass)

“Perfume like floral notes hit the tongue on the light while a mustiness lingers on the palette. A quarter inch in a bold amount of black pepper enters the fray with minor notes of dark cocoa, soap/floral, and smoky woodsiness coat the tongue. This profile remains throughout the rest of the third. ” –John A. (Bostoneo)

“Wow! The bitter chocolate and earthy notes this stick puts out in the first inch are thick enough to chew on. A real flavor bomb!” –Dave W. (mdwest)

“A tiny bit of sweetness makes itself known on the finish of every puff during the second third. Otherwise the flavors remain the same as the first third. ” –Dave W. (mdwest)

“The final third begins with a big peppery start with notes of dark chocolate on the finish. Intense smoky flavor and syrupy sweetness comes in with an uneven burn, touch up time. This stick finished up with pure spicy black pepper, nap time. ” –John A. (Bostoneo)

“This cigar just keeps getting better. Bread is beginning to dial further and further back. The mud is coming to the fore front. The orange zest is still on the finish as well” –Ryan H. (Ryan H.)

“Draw is on point and has the perfect amount of resistance. Also getting a good amount of smoke with each draw.” –Daniel S. (Daniel S.)

“Was a little worried about the construction because of how loose the seams looked However, there was no construction issues and the cigar burned cool the whole time.” –Daniel S. (Daniel S.)

“I really enjoyed this cigar. Would look forward to buying some ” –Ryan H. (Ryan H.)

“Overall I would say the cigar was ok. The whole time smoking it, it felt like something was missing flavor wise. I like pepper but it got boring after a while with the same note. I felt that the flavors lacked complexity and depth. The draw was really good and the cigar had good smoke production. The construction was also solid.” –Daniel S. (Daniel S.)

“This was an ok smoke, it was too one dimensional for me. The cigar didn’t really hold my attention. Strength was medium at best. Unfortunately there was some tar build up that made me put it down with about 2 inches to go. ” –Mickey T. (irratebass)

“Overall this was a solid performing smoke. A bit full bodied and strong for sure, make sure you have something in your stomach before smoking this bad boy, it will hit you going into the second half. Flavors were spot on for a full bodied smoke and diverse enough to make it interesting. Try one out, may be your next full bodied goto!” –John A. (Bostoneo)

“One of the best smokes I’ve had this year. All I need to know is what this stick was. I am ready to go buy a box tomorrow. ” –Dave W.(mdwest)

SUMMARY “Overall this was a solid performing smoke. A bit full bodied and strong for sure, make sure you have something in your stomach before smoking this bad boy, it will hit you going into the second half. Flavors were spot on for a full bodied smoke and diverse enough to make it interesting. Try one out, may be your next full bodied goto!” -John A. (Bostoneo)